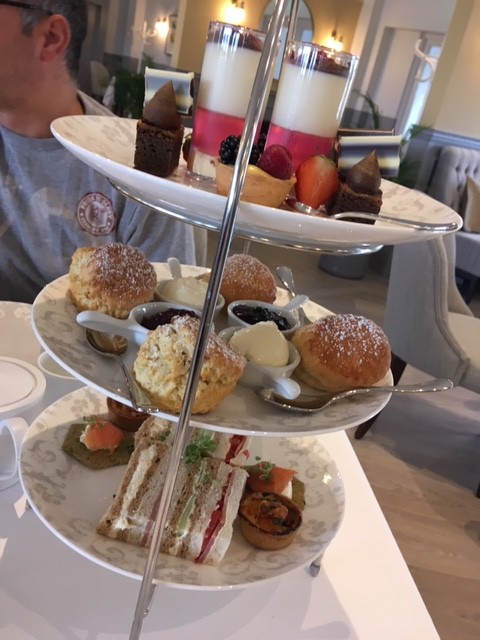 ​As we were celebrating a birthday (it was somewhere between a 30th and 40th) we booked to go to somewhere we hadn't visited before. The newly opened Laura Ashley Tea Room at High Bullen Golf and Country Hotel was offering an amazing 2 for 1 offer that was too good to miss. As we felt we were getting a great deal on the food we decided to also book a room and stay over. We took our youngest child with us and had pre booked a 'family estate room' which as priced at £104pn. Our room was in one of the properties away from the main hotel and located in Deer Park and was spacious and roomy. The hotel were aware that a child would also be sleeping in the room so aside from the main super king size bed they had also made up an extra double bed. The room also had a sofa and two arms chairs, a large wardrobe, a coffee table and a dressing table. The bathroom has a shower over a bath and was also a nice size. The room was very clean and the bedding was of a high quality. For an added touch rather than finding a information folder in the room, a fully functional tablet held all the important details including links to the hotel restaurant menus. 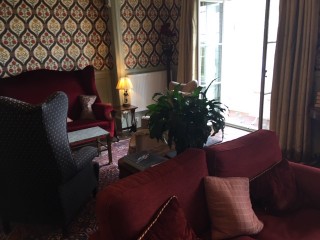 ​Our table in the tea room was booked for 1pm however we arrived slightly early and thankfully at this time of the day and probably as it was a weekday the restaurant was ready for us. The tea room looked really fresh and contemporary and is decorated entirely in Laura Ashley. The tables are all dressed in crisp white linen and the lighting is warm and inviting. The colour scheme and finishing touches around the restaurant give the space a high end feel. One of the waitresses met us at the door and we were warmly welcomed to our table. 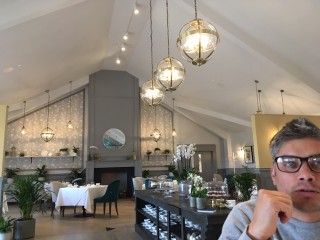 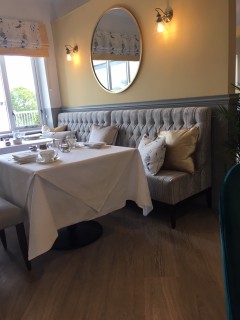 Soon after we sat down, a waitress came over to ask what Afternoon Tea we would like. There are a few options and we went with the standard tea. Initially we thought that our 3 year old could just eat some of ours but having asked the waitress her opinion she recommended we order a children's afternoon tea along with ours. We were really glad we did that as when it arrived it was really spectacular and as our daughter chose this moment to decide she felt poorly and tired, it kept her interest and quiet for a while longer! Unlike the adult tea, the children's one was presented in a innovative caddy box that contained 5 draws. In each one, a different treat could be discovered. Scones, petit fours, tiny finger sandwiches and a draw of fresh berries adorned the boxes and the show stopper was a cute little stick of baby blue candy floss sticking out of the top!! instead of a pot of tea the children can choose form a chocolate or strawberry milkshake that was presented in a ceramic milk bottle with a straw. The staff obviously enjoyed bringing these to the children and one gentleman who I presume was perhaps the hotel manager came over to tell us that if she wanted more candy floss to give one of the waitresses the nod. We thought it was a really lovely concept and a very child focused experience. 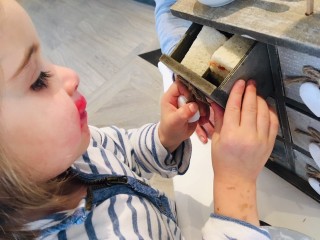 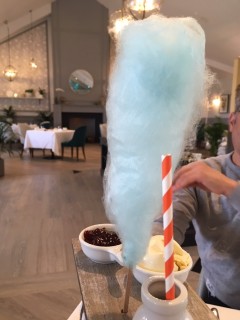 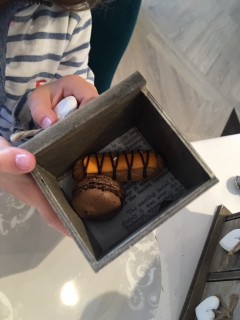 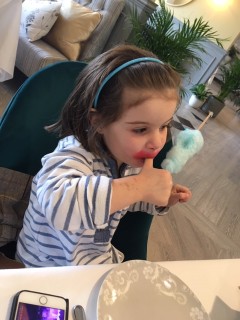 ​Our afternoon tea began with an amuse bouche. A delicate sherbet whip on top of a berry coulis was presented a small glass cylinder and it was touches such as this that gave the whole afternoon tea experience a contemporary and high quality feel. While we enjoyed this, our choice of tea was bought out in stunning Laura Ashley dining wear. The tea menu was large and offered something for all tastes including a organic vanilla tea. Without delay our place settings were cleared and the main event arrived on a beautiful three tier afternoon tea stand. 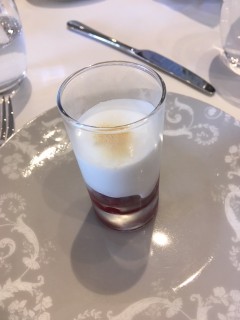 On the bottom tier an array of different finger sandwiches included classics such as cream cheese and cucumber along with some welcome additions of beef and horseradish and ham and tomato. Also on this savoury tier was salmon on what appeared to be thin oat cakes and mini cheese and tomato quiches cased in the most beautifully short and crisp pastry. For me, these little savoury bites were one of the best bits of the whole tea. I could of eaten a lot of those!

Going up a tier we were treated to some really tasty scones ( FYI we pronounce it sc -on not sc-oan!). Now, living in North Devon as we do, we have eaten a lot of scones and feel we are well qualified to judge on the bake of them. We can officially tell you that these scones were some of the best we have tried. They were perfectly baked and had neither soggy or hard bottoms! I particular enjoyed changing the traditional cream tea up a bit and chose to try blackcurrant jam and lemon curd on top of my clotted cream (Cornish readers take note - jam on top of the cream).

As we came to the top of the cake stand we dug in to the exquisite petit fours that layered the plate. The chocolate brownie type sponges were rich and moist and that lovely pastry we had eaten earlier with the quiches appeared again, sweetened and encasing a mini creme anglais fruit tart. Totally yum!

At this point our daughter was starting to flag and although we could of stayed their and taken much more time eating all this lovely food we decided she needed to go and have a rest. The waitress very kindly boxed up the remaining food and we went and checked into our room. 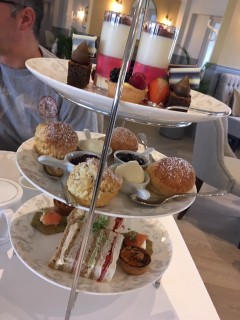 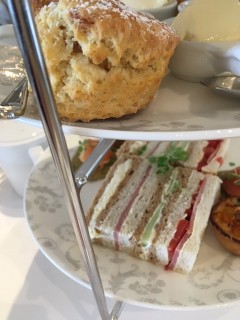 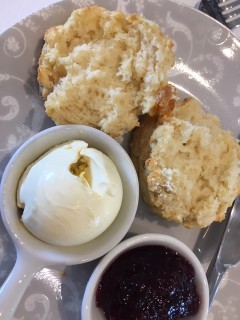 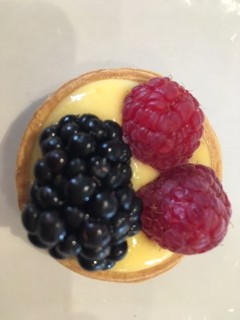 Having got the key card for our room we were pleasantly surprised at the size of the room. You could certainly spend time in there in the evening without feeling as if you are stuck in a hotel room. It's homely and the essentials as we see them like a TV were of a good size. The reception rang the room to say that as they were busy that evening they had made a reservation in their fine dining restaurant on our behalf. Obviously we informed that as our daughter was poorly we would not be having dinner in their on this occasion. Very helpfully the night receptionist Maddie explained that we would be able to order takeaway from their other restaurant and given the situation they would even deliver it down to our cottage. The general feeling was nothing was too much for her and she was very sweet and the food turned up bang on when we had requested it for. We had ordered pizzas and other things like chips. It all came down with plates, linen, cutlery and even tubs of tomato sauce! Awesome! We were really impressed and the quality of the food was really good. Only a £5 room service charge was added to the food bill which we thought was more than fair. 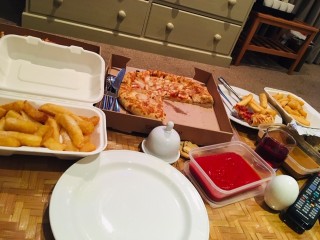 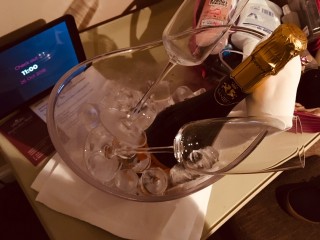 In the morning we went up to the main hotel for our breakfast that was included in the room rate. Breakfast is served in what I believe the fine dining restaurant. The decor is quite similar in style to the tea room and the dining chairs are upholstered in a plush teal and taupes. The spectacular view looks out over Exmoor and although it was a drizzly start the panoramic windows still offered a lovely backdrop. The continental offerings were adequate but not extensive however the cooked breakfast menu more than made up for it and having stuffed ourselves the day before with cakes and chips we all decided to eat slightly lighter than a full English breakfast and chose salmon and eggs which was plentiful in portions and cooked well.

Having our two other children to collect we decided to hit the road and drove the 20 minutes back to Barnstaple. The hotel is located in Chittlehampton so although not far, the rural setting does make you feel that you could be anywhere and we would recommend this hotel for both locals and tourists alike.

We will definitely go back. 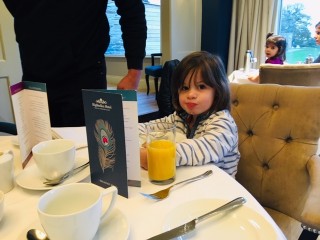 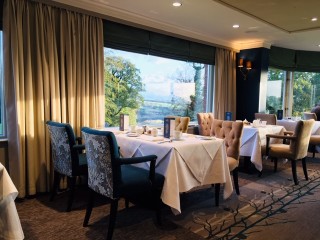 By accepting you will be accessing a service provided by a third-party external to https://www.windowcleaningbarnstaple.co.uk/