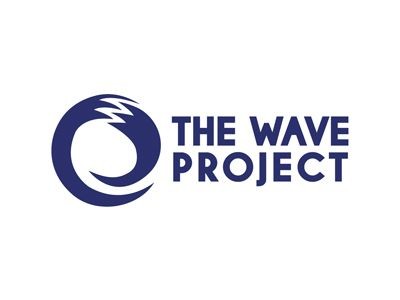 Back in July we received a call to say our daughter (who we shall refer to as V) had been accepted for a free place onto The Wave Project. Based in Newquay, this innovative surf therapy charity has hubs across the country including our local beach Croyde. Its primary aim is to increase self esteem and confidence by reducing anxiety through surf therapy.

V is 8 and struggles with confidence and anxiety due to the trauma of our youngest daughter having been seriously ill. We felt that locally in North Devon there wasn't much support available for her as we didn't fit into the boxes that the children's mental health services impose when assessing the need for support. It was a chat with the school nurse that eventually flagged up the Wave Project as being  a charity that might be able to help her regain some confidence. 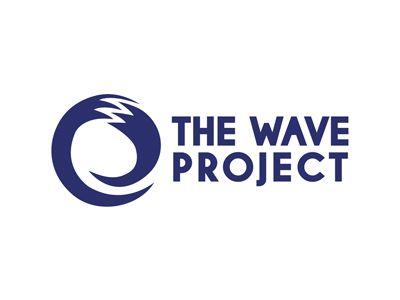 ​The local coordinators Ian and Helen gave us a call to say that the 6 week course would start in September. We received a pack through the post that included a information for us as the parents and a child focused questionnaire for V. She was asked to rate from 1 -5 how she felt about herself across different things like confidence and also asked other questions about what makes her happy etc.

We were asked to arrive at Surf South West in Croyde on the day at 4pm and to bring just a towel and a swimming costume, as they provide all the other bits such as a wetsuit and board. Parking was also free thanks to the local holiday park  (Parkdean) providing spaces in the car park for the families attending.

We were greeted with a warm welcome by Helen and were quickly ushered in to meet the other children who were all waiting eagerly. Local volunteer Seb sized up the children for wetsuits and we began the arduous task of getting V into her in a full length wetsuit. In less time than intially feared she was ready to rock and we gathered together to begin, all full of excitement.

The lovely part of the lessons are that each child has a 1-1 mentor who stays with the child for the full 2 hours. These people are all surfers themselves and give their time freely to the project. Interestingly, during this session a number of the mentors were actually from Brighton and were in the area on holiday. They usually volunteer with their local branch of the project but kindly decided to help out in the North Devon project.

Our mentor was Ginnie (I hope that's the right spelling!) and she lives locally. She chatted to V and tried to put her at ease by telling us about herself. She asked us about the school holidays and gave us a a good tip for getting the wetsuit on next time (plastic bags over your feet!). The children were asked to form a circle and the group including the instructors briefly introduced themselves (great confidence building technique). 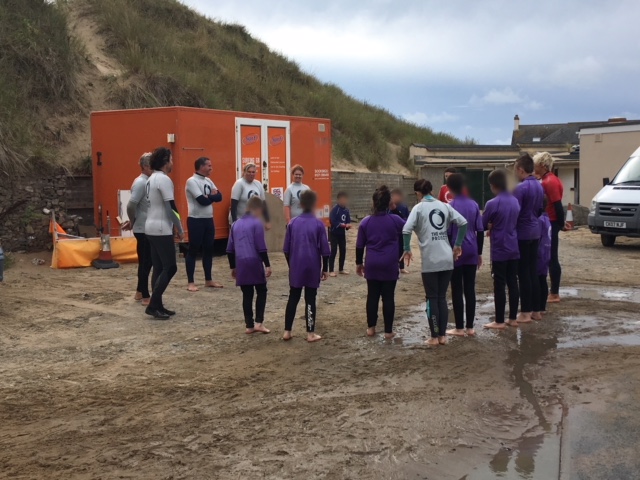 ​It was then time to hit the surf! The weather was pretty breezy and showery however the children barely noticed as they rushed confidently in the sea with their mentors. A child is never forced to do anything in the water and if they would rather play in the waves or on the sand digging holes they can do this. As I sat on the beach and watched them all splashing about I was really touched to see two of the young boys get out and start digging bug holes in the wet sand. Instead of asking the boys to get back in the water, one of the male mentors and Helen the coordinator came out of the water and sat with them digging. The level of encouragement was really special and every time one of the children manged to get up on the board or get back on the board after being thrown off by a crashing wave there was loud cheers and whoops from all the volunteers.

Two hours flew by and the large group eventually made their way back up to the surf hut. Big smiles and chattering ensued and V was telling me how fantastic the session was. All the kids helped wash off their sandy wetsuits and before we knew it, the first week was over. Although the parents aren't required to stay during the sessions I am really glad I did. Part of building a child's confidence is celebrating their triumphs with them and supporting their endeavours. 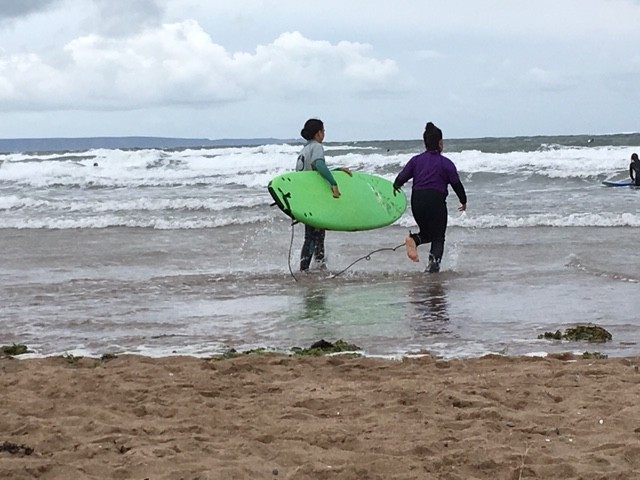 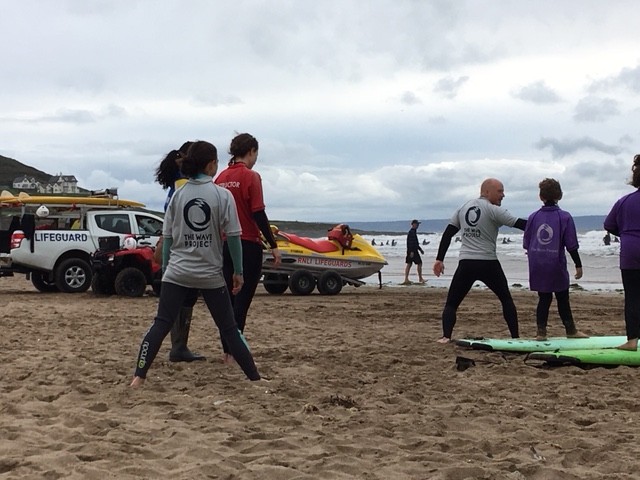 ​The Wave Project is a charity and therefore does rely on donations and fundraising. Although they were successful in securing lottery funding this of course is not indefinite. Referrals can come from any professionals that may be involved with a child or their family. V  was reffered by the school nurse, however they will accept referrals from teachers, GPs, social workers etc etc. Your first pint of call would be to ring the head office number that can be found in their website link at the bottom of the blog. I spoke to the founder and CEO, Joe, today who was really helpful. They are always grateful for anyone wishing to fundraise or if you are a keen surfer yourself you might want to offer your time.

The benefits of the project has also been independently reviewed. The following text  is referenced on the Wave Project website.

"The Wave Project has published two independent reports about our surf therapy programmes. The first was published in 2014 and peer-reviewed the following year. This focused on the impact of our six-week surf therapy courses and follow-on surf club. The peer review paper about this evaluation, published in January 2015, concluded:

"The intervention resulted in a significant and sustained increase in wellbeing. One year later, 70% of clients regularly attend a surf club and many have become trained as session volunteers. Parents and referrers noticed an increase in positive attitude and better communication, as well as improved self-management and behaviour at both home and school. It is concluded that the Wave Project provides a demonstrable and cost-effective way to deliver mental health care, mentoring and social integration of young people. Further service evaluation of accessibility and long-term outcomes is also recommended."

The team & the board | Wave Project | Changing lives through surfing

By accepting you will be accessing a service provided by a third-party external to https://www.windowcleaningbarnstaple.co.uk/